When the Word of God Is Proclaimed 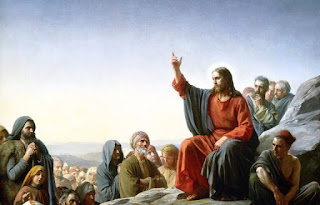 Can we feel the awesome power of the Word that is enough to crush our pride and literally wrestle our bodies down to prostrate to the ground?

The Liturgy of the Word is an important way that the Holy Mother Church uses to feed her lambs (cf. Jn 21:15).  The spiritual food that the Church faithful are served this Sunday is particularly nutritious. She gives us two distinctive scriptural narratives on the proclamation of the word of God: one by Ezra, a prominent postexilic leader from a scribe and priestly background; the other one by Jesus himself. Both are events of high drama, highlighting liturgical solemnity and structure in the order of worship that bear great resemblance to present day Catholic practice.

The first narrative takes place in an ancient setting that is filled with theatrics. Ezra, the scribe-priest, reads the Book of the Law to the remnant of Jews who have survived the Babylonian exile and captivity. Standing on a raised, wooden platform at one end of the open place before the Water Gate, he reads “from daybreak till midday”, and they listen attentively (Neh 8:3). What follows is a sequence of electrifying moments fitting for a Hollywood movie: Ezra “opened the scroll…all the people rose…[he] blessed the Lord, the great God, and all the people answered, ‘Amen, amen!’…then they bowed down and prostrated themselves before the Lord, their faces to the ground…all the people were weeping as they heard the words of the law” (Neh 8:5-9).

More than just an account of how ancient Israel renewed its Covenant with the Lord by proclaiming the sacred scriptures, the deliberate descriptions in the first reading give us a glimpse of Israel’s liturgical practice both in the temple and the synagogue (note 1). The solemnity is striking, and the reverence of the people in worship downright awe-inspiring. So many years later, this ancient narrative is still a great teaching tool that really shows us how to worship.

The second narrative, selected from the Gospel of Luke, contains a similar event that unfolds with no less drama in the synagogue of Nazareth, Jesus’ hometown, on the Sabbath. His disciples and hometown people, who know him well and watched him grow up, are all in attendance (cf. Mk 6:3). Enters Jesus, the Scribe-Priest by whom the whole Scripture was written, about whom all the prophets spoke, and in whom all the priestly sacrifices were offered and are still being offered. Known for his mastery of the Greek language and literary skills, Luke’s penchant for theatrics is a talent often overlooked by the scriptural scholars (note 2). His description of the drama that follows can easily dwarf the work of any Oscar winner of the best screenplay!

Let’s revisit Luke’s words. Notice how in a matter of a few short verses, his depiction of a quick succession of hasty actions is enough to make any listener gasp for air. It’s as though a great mystery is unraveling before our very eyes: Jesus stands up to read. He is given a scroll of the prophet Isaiah. He unrolls the scroll, reads Isaiah’s prophecy on the Messiah’s mission which is “to bring glad tidings to the poor…liberty to captives…recovery of sight to the blind…let the oppressed go free…[and] proclaim a year acceptable to the Lord” (Lk 4:18-19). He then rolls up the scroll, hands it back to the attendant, and sits down. The eyes of all in the synagogue are looking intently at him (4:20-21).

In ancient Jewish tradition, when a rabbi “sits down” after reading the Scriptures, it means he is about to give a homily (note 3). Thus, in the Sermon on the Mount, Jesus “went up the mountain, and after he had sat down, his disciples came to him [and] he began to teach them” (Mt 5:1-2).  It’s not hard to picture how electrifying the atmosphere is when Jesus sits down in the synagogue. Anticipation is keeping everyone wait. With a little Hollywood hyperbole, we can almost see them huffing and panting under the weight of suspense. The silence is deafening; one can hear a pin drop. But deep in the hearts of those watching closely Jesus’ every move, speculations and murmurs are rising like a tidal wave: Isn’t this the carpenter, the son of Joseph and Mary? Don’t we know his brothers and sisters very well (cf. Lk 6:22, Mk 6:3)? What is he going to say?

What he says next, according to Luke, is a very brief statement: “Today this scripture passage is fulfilled in your hearing” (Lk 6:21).  Need he say any more? Here he is, finally, the Messiah promised by Isaiah’s oracle! He has been anointed to bring glad tidings to those living in poverty, which is everyone spiritually speaking; and to perform healing and miracles, which in a very real sense is another way to see Messiahship. As if to prove his words, he leaves his hometown and performs many miracles soon after the synagogue incident (Lk 4:31ff, 5:12-26).

We are the remnant of Jews listening to Ezra’s proclamation of the word of God. This world is our Babylon, our exile. The same word of God is proclaimed to us at every Mass. Do we have the reverence to listen attentively? Are we moved by the Spirit to say in one accord “Amen, amen!” in response to the proclamation? Can we feel the awesome power of the Word that is enough to crush our pride and literally wrestle our bodies down to prostrate to the ground? Do we see Ezra in our Mass celebrant who speaks from a higher ground and makes us mourn and weep?