Living In A Contraceptive World

In today's National Post, Fr. Raymond de Souza discusses today's contraceptive culture after several decades of "sexual revolution" (http://fullcomment.nationalpost.com/2012/02/16/father-raymond-j-de-souza-what-contraception-has-wrought/). It is, in Fr. Raymond's words, a culture that has "plenty of sex, but less enduring love, a demographic collapse, more fragile marriages, more fatherless families, the emergence of a 'rape culture' on campus, more sexually transmitted diseases, an infertility epidemic and rampant degradation of both women and men in advertising and ubiquitous porn".
Humanity is indeed in a state of ruin. Four decades ago, no one but the prophetic mind of Pope Paul VI could have seen this coming. In Humanae Vitae (released in 1968), the Holy Father predicted accurately that contraception would lead to conjugal infidelity, a lowering of morality especially among young people, loss of respect for women, and immoral intervention into the most personal and most reserved sector of conjugal intimacy by public authorities.


It is hard to believe but today the contraceptive culture is embraced not only by our society at large but also by many clerics, scholars, and worshippers representing the mainstream religious voice (understood in the Judaic-Islamic-Christian context), which as recent as in the early 20th century was still solidly opposed to contraception. It wasn't until 1930 when the Anglican Church broke rank with the Christian world to give qualified approval to contraception at the Lambeth Conference that the historic consesus of Christianity on the immorality of contraception began to show signs of falling apart. Since then the pro-contraception force of the secular world continued to gain dominance with each passing day. Today the use of contraception is generally accepted without question. This is true even among many Catholic worshippers, although the teaching Magisterium of the Catholic Church remains firm in opposing it. Depending on which side of the issue you are on, the Catholic Church is seen by the general public either as "public enemy number 1" or as "the lone voice in the wilderness" that still carries the weight of moral persuasion.
In my view, there is only one issue that determines whether a married couple will accept or reject the contraceptive culture. If husband and wife are able to understand and accept that their one-flesh union actually transcends the temporal and physical sphere of biological desires and serves as a sign pointing them to the greater and everlasting good of the one-flesh union of Christ and the Church, they will never allow contraception to desecrate the holiness of their conjugal intimacy. For a married couple who takes their marriage as a vocation and understands the sacramental nature of the marital embrace, their bedroom is a sacred place of worship and their bed an altar where their wedding vows are regularly renewed. This is the key point I wish to drive home to the participants of this year's Catechism Revisited Program (www.crp.cmccbsp.org) in sharing with them Pope John Paul II's Theology of the Body.
Posted by Edmond Lo at 2/16/2012 11:06:00 PM 2 comments:

The Heavens Declare The Glory of God (Psalm 19:2)

It’s Saturday again. We woke up to a rather heavy snowfall and decided that we would brave the snow to eat breakfast at a nearby restaurant. The food was energizing, giving me strength to deal with the aftermath of the snowfall. I shovelled the driveway, cleared the snow bank left behind by the snowplough of the city, and cleaned up the front porch of the house.
Sad to say, my snow blower that was as old as the house went dead for the first time after almost 20 winters of loyal services. Having made several attempts to revive its engine, which responded with not even the faintest splutter, I pushed the rusty and wonky machine back into the garage which suddenly seemed more like a junkyard for ridding old, dysfunctional appliances.
Is winter always about dying and inactivity? Does living in mean having to accept a long stretch of the year where one can do no better than finding shelter in a heated and insulated house in order to ward off freezing temperatures and howling winds? I couldn’t help but wonder.
I had to pick up Josephine in about 45 minutes, who was shopping at Loblaws. Usually she would drive, but with a heavy snow driving automatically became my responsibility. Instead of idling around, I decided to take a quick walk around the Toogood Pond which was only a few minutes from home. 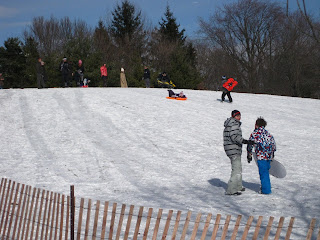 The naturalized Toogood Pond, fresh after a heavy snowfall, was a magnificent and scenic winter wonderland; it looked like a page taken right out of C.S. Lewis’ Narnia: The Lion, the Witch, and the Wardrobe. On a Saturday, it was busier than usual in spite of the snow and the freezing temperature. The pond was flying a red flag to indicate danger, but the warning meant little to some youngsters who, with shovels in hands, worked hard to push away the snow on the pond to create a skating rink. Elsewhere tobogganing and squeaking cheerfully in the hilly areas of the park were several small kids accompanied by their parents.
I got off my car; stepped on the snow that was fresh, nicely compact and squashy; and found my way to a meandering wooden bridge that stretched over a creek. I had lost count of how many times this stream had frozen up and then melted again in this winter due to unseasonably warm weathers. But on this day rustling through the bushes of the marsh were bitterly cold winds from the north; patches of white snow, left behind by the blizzard, lay glistening on the trees that lined up orderly along the two shores of the frozen creek. The afternoon sun streamed in through the trees to give the finishing touch to a natural painting that showcased the austere and majestic beauty of winter. Standing in the middle of it all – a world of silence that spoke a thousand words - I felt small and out of place, and my heart recited prayerfully the words of Psalm 19: 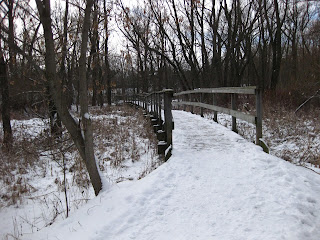 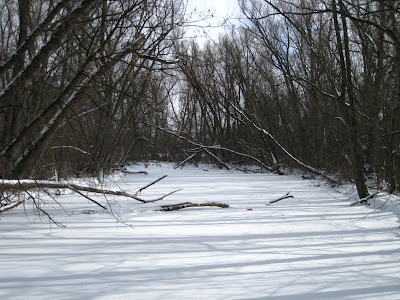 The heavens declare the glory of God; the sky proclaims its builder's craft. One day to the next conveys that message; one night to the next imparts that knowledge. There is no word or sound; no voice is heard; yet their report goes forth through all the earth, their message, to the ends of the world.
A tourist holding a cup of Tim Hortons coffee approached me just as I completed the walk with the last decade of the Joyful Mystery. With a camera in hand, he asked, “Would you mind taking a picture for us?” Behind him stood his wife who flashed a friendly smile and nodded thankfully. “Sure!” I said. I was about to push the camera button when they gestured me to kneel down for a better angle. I readily obliged, finished the picture, handed the camera back, and said goodbye. “Enjoy the snow!” they shouted as I walked away. “Sure!” I said. Just another do-nothing Canadian winter day.
Posted by Edmond Lo at 2/12/2012 09:03:00 PM No comments: