What The Human Eyes Cannot See 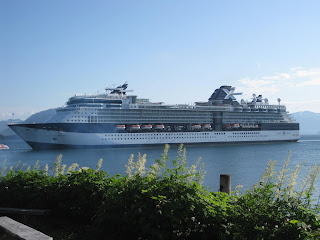 Summer in Toronto is a beauty. Too bad it is so short. This summer of mine began with an 8-day cruise trip from Vancouver to Alaska, in which I was reunited – or reacquainted – with 3 very good secondary school classmates whom I had not seen for almost 40 years. Every evening on the cruise, we would gather in my cabin to play “catch-up”, rediscovering 40 missing years of one another’s whereabouts, undertakings, accomplished ideals, and unfulfilled aspirations.

At one of the evening meetings, I recounted the story of my personal conversion, how it happened to me almost 20 years ago, and how it changed me drastically from a “Church rebel” to an apologist whose life now featured only Christ and the Church as its centerpiece. They listened to my story intently and with great respect. At the same time, if my perception was correct, there was also a little bit of skepticism. “Really…?”

Maybe the perceived skepticism was just suspicion on my part. But if it was true, I wouldn’t blame them. After all, they knew me well. They remembered well my shortcomings as a youth. They knew where I came from, how I grew up, how I used to crave for “good look”, earthly success, and honor. “Ah, so all of a sudden you want to be a saint, eh? I see…” They probably believed they got me “figured out”.

What they could not figure out – what the human eyes could not see and human reason could not fathom – however, was my spiritual transformation, which my personal misdeeds and shortcomings, no matter how bad, could not impede; and my ancestral roots, whether extraordinary or common, could not generate. It was the work of the Holy Spirit who, like the wind, “blows where it wills” (Jn 3:8). It was God’s grace that saved in spite of my wretchedness; illuminated in spite of my blindness; and lifted aloft in spite of my lowliness.

Jesus’ contemporaries also thought they had Jesus figured out because they knew his family and where he came from (cf. Jn 6:42). How could the carpenter’s son whom they knew so well make the ridiculous claim that he “came down from heaven” (Jn 6:41), they wondered. Jesus’ true identity is something no human eyes can see and no human reason can fathom because it is of divine origin. So is the conversion of a sinner's heart.

Email ThisBlogThis!Share to TwitterShare to FacebookShare to Pinterest
Labels: Thoughful and Easy

在尋求真理的路途上，望謹記以上兩點提示，時常反覆思量。縱使今天不明白和不相信，只要你願意謙卑自下，保持心靈開放，天主無限慈悲，在聖神助佑下，總有一天祂會助你頑石點頭，將鐵石的心換上血肉的心。願共勉，並互相代禱！
Posted by Edmond Lo at 7/10/2015 03:47:00 PM No comments: