As early as 2010, BXVI was asked whether a Pope could resign. In hindsight, the answer he gave in the book Light of the World was ominous: "Yes. If a Pope clearly realizes that he is no longer physically, psychologically, and spiritually capable of handling the duties of his office, then he has a right and, under some circumstances, also an obligation to resign" (p. 30).

Fr. Raymond De Souza offered a theological explanation for the Holy Father's resignation. According to Fr. De Souza, papal resignation is "canonically possible" but "incomprehensible to the Roman Catholic imagination". Essentially what the Holy Father did had made this canonically possible but almost unused option (used before by Gregory XII in 1415 and Celestine V in 1294) alive and available again, paving the way for future Popes to follow suit for the good of the Church when necessary. As the Pope, BXVI considers himself the Servant of the Servants of God. When poor physical and mental health causes the Servant of the Servants of God to lose the ability to serve well, he should have the humility to accept his inability and step down.

BXVI has never been shy in admitting his personal admiration for the Blessed JPII, the former Pope. But the two of them are two very different persons. Their differences are clearly reflected in how they faced the issue of papal resignation. When asked whether he would resign due to poor health, JPII's response was that Christ did not come down off the cross and neither would he, the Vicar of Christ. This is vintage JPII. Unlike BXVI whose emphasis is on being a good and responsible servant, JPII's appeal is to one's heart and faith. These are two very different approaches that are not in direct contradiction to one another in and of themselves. The goal is the same: to follow Christ, but the means of achieving it are different. One does so by serving and the other by suffering; one is honest and humble in admitting personal inability and the other courageous and persevering in suffering together with Christ until the very end. Both are excellent role models.

Today when we think of JPII, the image that surfaces in our head is not his younger and robust self that had caused communism to crumble. It is rather the haunting look of a frail, hunch-backed, hollow-eyed old man with a bland face that reflected painfully the tortures of many years of Parkinson's disease, and unsteady hands that hung tight to a crucifix that for all practical purposes was his cane - an unmistakable image of the Suffering Servant of the Lord. 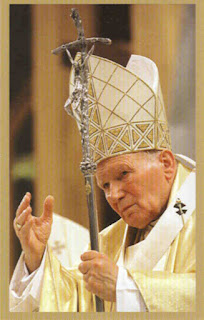 Email ThisBlogThis!Share to TwitterShare to FacebookShare to Pinterest
Labels: Church Activities and Events, Digest, The World and Me