After a 10-hour flight from Toronto Pearson, we landed in Rome at 7 a.m. and headed immediately to the port where our cruise ship, Celebrity Equinox, docked. 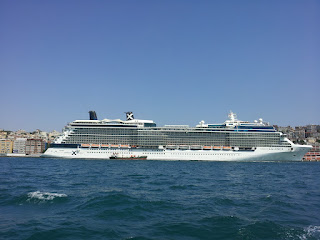 The last time and the only time our family had a cruise trip together was 12 years ago at the Caribbean. It was unfortunately a forgettable experience, so much so we thought we would never take a cruise vacation again: the ship was old, its amenities and services uninviting, and its passengers rowdy and rude. We found ourselves virtually "imprisoned" for several days with nothing better to do than counting the minutes and the hours, longing for the freedom of disembarkment.

12 days on board the Equinox flew by like a 12-minute merry-go-round, leaving us dazzled and wide-eyed. When it was all over, we left the ship like four little kids leaving a store full of goodies, clamouring for more of the thrills and the sweet moments that had gone by so swiftly.

For one thing, the ship was almost brand new - no more than 3 years old. It was spacious and well-designed, with 13 decks, beautiful staterooms, magnificent venues, fine dining and entertainments, and pleasing interior colors throughout. The feeling was more like staying in the safe and solid confines of a 5-star hotel than being afloat at sea.

More important, however, were the destinations and excursions carefully planned out and organized by Josephine. We stopped over and disembarked at Santorini, Greece; Istanbul, Turkey; Ephesus, Turkey; Athens/Corinth, Greece; Crete, Greece; Naples, Italy; and ended the trip at Rome. The temptation is to write a page or more for each destination, but to keep the length of this post readable I will discipline myself to show only a few pictures and to share some of the highlights and my thoughts. So here we go!

(1) Glimmering white and blue Santorini - it's so Greek! 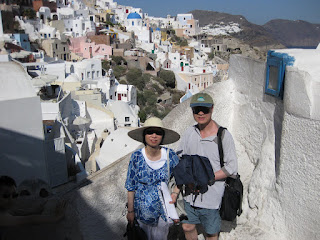 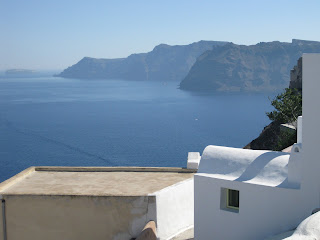 (2) Istanbul , formerly known as Constantinople in Roman times, was a historic city I had read so much about: its strategic geographical location that spanned over 2 continents - Europe and Asia; its intense rivalry with Rome to become the centre of the Roman Empire; its ancient landmark "Hagia Sophia" - the epitome of Byzantine architecture and the largest cathedral in the world for nearly a thousand years....It's hard to believe but there we were, my family and I, setting foot on this very ancient city, experiencing the riches of its culture and history. Once a glorious Christian cathedral that showcased the world's largest dome and magnificent Christian paintings and mosaics, Hagia Sophia was taken over by the Muslims in 1453 and was converted into a mosque. Believing that human images would constitute idolatry and blasphemy, they covered up all religious art works with a layer of greyish plaster. As a result, the massive building, now a museum, appeared bare and gloomy. My heart sank as I thought of the grandeur and holiness that had once infiltrated the cathedral structure to render so many religious souls in awe and reverence. 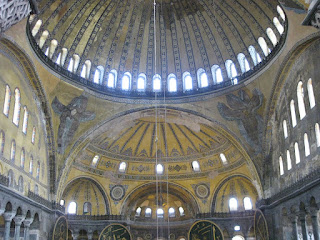 (3) We also toured the Blue Mosque, which was located just next to Sophia; and got on board a ferry that took us to the part of Istanbul where "Europe meets Asia". 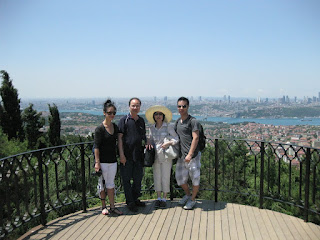 Knowing the stern and terrifying image that the non-Muslim world had formed, rightly or wrongly, against the Muslim countries especially since 9/11; our tour guide made a point of showing us the secular and westernized life style that the country had chosen to adopt, explaining that the Muslim faith that Turkey believed in was a moderate and inclusive one.

(4) The rest of our trip was like "a prayerful journey to follow the footsteps of St. Paul": the Arcadian Way and the amphitheater of Ephesus where Paul and his companions had survived unscathed the furious riot of the silversmiths who rose against them to protect the goddess of Artemis (Acts 19); 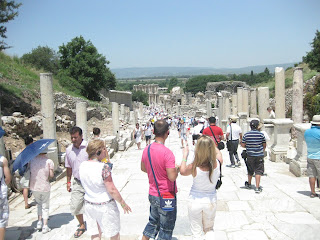 the Areopagus in Athens where Paul debated the Greek philosophers to help them understand that God, who had revealed Himself through Christ, was not an "Unknown God" (Acts 17:16ff); 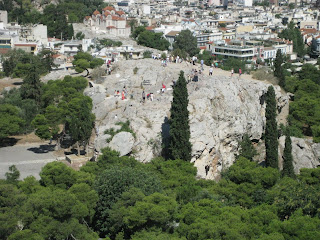 the ancient city of Corinth where Paul established the Corinthian church and faced accusation by the Jews at Bema (the tribunal, Acts 18:1-17); 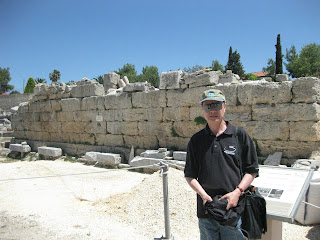 the beautiful little port near Corinth from where Paul set sail to Syria, Ephesus and then to Caesarea and Jerusalem where he was arrested and imprisoned (Acts 18:18-22, 21:1ff); and finally to Rome where he was martyred. 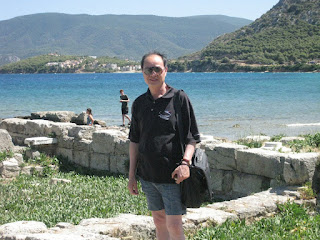 (5) While In Ephesus, we also attended Sunday Mass at the House of Virgin Mary, 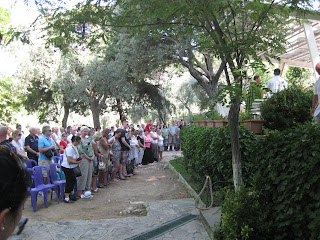 and visited the St. John's Basilica, a once great church built on a 2nd century tomb thought to hold the remains of St. John. Praying at the tomb of the author who wrote the gospel I like the most was a moving experience that mere words cannot describe; a stone I picked up from the area will keep me physically in touch with this great evangelist to whom the 2 letters of John and the book of Revelation are also attributed. Seeing the ruins of the Church of Mary where the first ecumenical Council of Ephesus was conducted in 431 A.D. and the doctrine recognizing Mary as the Mother of God (Theotokos) affirmed was a spiritually stirring experience that I never thought could have happened. Suddenly the very venue of this significant event in the history of the Church that so far had been perceptible only from the pages of my theology textbooks was right there before my very eyes! 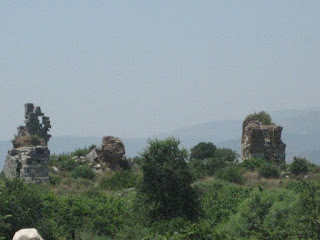 As the cruise trip concluded and we disembarked to Rome, my heart was still hovering over the densely populated coasts and glistening waters of the Mediterranean and Aegean seas, defying space and time to become one in spirit with myriads of people who in the course of time unstoppable had paraded across the stage of history and yet remained vivid and alive in the mysterious faculties of the human mind....