FLL Retreat - A Message of Love and Life

I had a good time hosting the FLL retreat yesterday. The retreat was one of the events of the FLL Summer Evangelization Festival, which kicked off on June 18 with two seminars by Deacon Wu, followed by Fr. Kwan Kit-Tong's seminars and retreat, culminating in the "愛‧擁抱我生命 A LIFE Show" of Saturday, August 27. 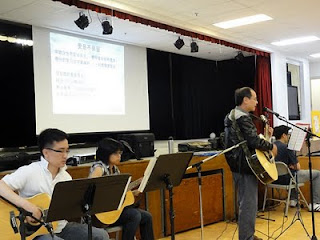 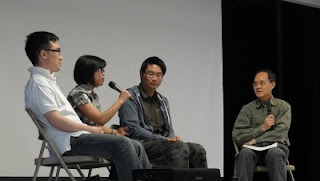 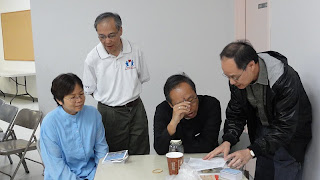 The retreat began with a morning Mass celebrated by Fr. Kwan in the CMCC church. The participants were then invited to go downstairs to the Don Bosco Hall where the rest of the activities were conducted. Everything went as planned except for the crowd, which caught us a little off guard: we had more than 300 people in the audience! Can you imagine? That was the largest retreat I had ever hosted!

Ever true to his "fisherman" style, Fr. Kwan was very practical and down to earth. It was the first time I met him in person. In fact, we weren't introduced to each other until the activities of the retreat began in the Don Bosco Hall! And I was supposed to be his MC! His talk was very easy to understand, very lively, and very much in tune with the ordinary folks' daily life. He conducted two talks: one in the morning and one in the afternoon, plus an ad hoc Q&A session. The audience loved every minute of it. They just didn't seem to have enough of Fr. Kwan. He must be a very popular figure in the Catholic community of Hong Kong.

My other duty was to play the guitar and lead the participants in singing. Unfortunately I hurt my mouth accidently a week ago while leading the RCIA retreat. It was a freak accident which was a little unbelievable. No need to get into the details here. Suffice to say that the pain in my mouth was like a bad tooth pain. It healed somewhat a few days after the incident but it was still bad enough to discourage me from eating, drinking, and singing. To make things worse, my middle-finger had been somewhat immobile for several weeks. My physiotherapist told me I probably hurt its ligament by playing the guitar too much. Part of growing old I suppose! As a safe cushion, I invited Paul Tam and Rosa Tse to play the guitar together with me. Before going to bed I prayed my heart out asking God to take care of this problem for me.

When I woke up all the problems were gone. Right? Wrong! I found to my dismay that there was no noticeable improvement in my condition at all! If anything, it seemed to have gotten worse: my throat felt a little sore. Maybe the cold that Josephine had for a few days had finally found its way to sneak through the immune system of my body.

But surprisingly, for reasons unknown to me the moment I set foot onto the stage, I felt like suddenly all the ailments in my mouth and my throat were gone! I was able to talk and sing rather well, and my middle finger was moving freely with no noticeable difficulty! I wouldn't blame Paul and Rosa if they were wondering why they had to be there! For those who prayed for me, I owe you a big thank you! I know Paul and Bonny Yeung were in Medjugorje and they were probably praying for this retreat. Maybe that's the reason why!

It was a very powerful experience to lead more than 300 people to sing. We sang "愛是不保留", "為甚麼?", " 一點燭光", "可愛耶穌", "呈奉", "Pass It On", etc. Again, for reasons unknown to me people seemed to enjoy the singing experience very much. They were very loud and they apparently liked the songs. In the end, we did worship and praise using "You Are Near" as the background, ending with a rite that commissioned everyone to spread the Good News of Christ.

There's one more thing that I'd like to add: I think the event was very effective in introducing the FLL ministry to more than 300 people. 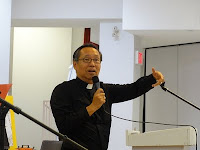