A Day in The House of The Lord

The last Sunday was not a day a Torontonian would consider as normal for December: temperatures hovering at around 6 Celsius, overcast skies, and drizzles that turned into rain sometimes. With umbrella in hand, Josephine and I ducked our heads as we hurried past the scaffolding at the side entrance of St. Michael’s Cathedral where renovation was in progress, to merge into the Cathedral’s regular Sunday crowd consisting of curious tourists and regular church-goers alike. Many members of our family group had already arrived, either sitting in the pews to marvel at the art works in the ceiling above or kneeling down to pray. Our itinerary for the day was jam-packed: noon Mass at the Cathedral, lunch at Eaton’s Centre, the St. Michael’s Choir Christmas concert at 3 p.m. in the Massey Hall, and then dinner to conclude a long day. Still feeling the effect of the international Year of the Laity webcast we participated in several hours earlier at the Chinese Martyrs Catholic Church in the wee hours of 12:30 to 4:00 a.m., our heads were fogged with sleep and our legs a little wobbly. We could only hope we would have enough strength to finish the itinerary! 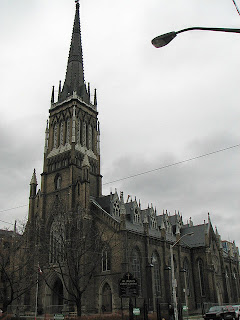 The timing could not have been more perfect: the noon Mass was about to begin in 20 minutes - just enough time for some of us to do the required obligations for obtaining the special plenary indulgence that the Holy Father granted the Church on the commencement of the Year of Faith (see my other post on this topic).

No sooner had we finished the indulgence obligations than the Mass liturgy started. Joining the entrance procession were almost 100 St. Michael's Senior Choir members who proceeded solemnly to the front with their eyes fixated on the crucifix at the altar. After the lengthy and orderly procession, the Mass celebrant stepped on the altar, turned to face the congregation, bowed to kiss the altar table, and began the Mass with that unmistakable voice of his - a voice that conveyed both love and wisdom; a voice that the City had come to know so well - the voice of Thomas Cardinal Collins!

Kyrie eleison! (Lord! Have mercy!)chanted the St. Michael's Choir; Kyrie eleison! the Mass faithful responded. The chant in Latin struck a chord in my heart because it was only two days ago that I explained to my Catechism Revisited class that Kyrie or Krios in Greek was from God's Hebrew name YHWH. It was used in the New Testament to address Jesus (e.g. John 20:28), suggesting its recognition of his divinity (see CCC 446). The Choir's heavenly chants in Latin and many other spirit-lifting hymns that followed turned out to be, as it were, a premiere of the afternoon concert.

The readings of the third Sunday of Advent were an exhortation on repentance and joy, both were long overdue and must be embraced by those who chose to follow God because the Messiah had come.

"Shout for joy, O daughter Zion! Sing joyfully, O Israel! The LORD has removed the judgment against you!" the prophet Zephaniah proclaimed joyfully in the first reading.

"Cry out with joy and gladness: for among you is the great and Holy One of Israel!" intoned the chorus of the responsorial psalm.

"Rejoice in the Lord always, and again I say: rejoice!" St. Paul joined in in the second reading.

The gospel reading was from Luke 3:10-18 where St. John the Baptist gave the people of the time a stern and fiery admonition on the need of repentance.

Much to my surprise and delight, in his homily the Cardinal used St. Edmund Campion, to illustrate his message that joy was possible even in the face of severe hardships. St. Edmund - my saint - was a 16th century English saint who was accused of treason by the government of Queen Elizabeth I for opposing Henry VIII's schismatic Anglican church. He was brutally tortured on the rack with the tearing off of his fingernails, and was eventually executed by hanging, drawing, and quartering on December 1, 1581. The Cardinal pointed out that St. Edmund accepted his execution with great joy for, in the words of St. Edmund, "To be condemned with these old lights (i.e. all the ancient priests, bishops, and kings of England who defended the Catholic faith) is both gladness and glory to us" (Weidenkopf & Schreck, Epic - A Journey Through Church History Study Set, p.174).

I had to close my eyes to suppress the burning sensation that was beginning to erupt and spill over from my heart. Already my eyes were moistening up and I could feel the lump that was hardening in my throat. "Is this a mere coincidence, O Lord?" I prayed in silence. "Only a few days ago I was listening, while driving, to the story of St. Edmund. And here we are on the third Sunday of Advent, in a cathedral church designated by the Holy Father as necessary for receiving plenary indulgence, You told me his story again through the Cardinal's homily. Before that my heart was burning on hearing Kyrie eleison. How badly has my heart been yearning for beautiful liturgies and You granted me one today! Forgive me for being presumptuous, Lord, but I must take this as Your confirmation that my request for indulgence has been granted and I thank You! Blessed be the saints for it's on account of their merits and the merits of Christ in the treasury of the Church that You granted me the indulgence. How good it is to live in the house of the Lord! 'One thing I ask, O Lord, and this I seek: to dwell in the house of the Lord all the days of my life!' (Psalms 27). May the same grace be granted to Josephine and to all family group members who came before You today to seek this extra-sacramental grace of remission of temporal punishment for our sins! Amen! Amen! St. Edmund, pray for us!"

The same liturgical procession that began the Mass in great reverence and solemnity an hour ago now exited with joy. The Cardinal chatted lightheartedly with people whom he recognized, and blessed everyone as he left the church. As the crowd dispersed, we lingered at the altar and stayed for a group picture. When it was all said and done, we saw to our surprise the Cardinal strolling leisurely up the aisle again to greet us. He stopped to talk to Matthias, the 8-year old son of Dominic and Fanny, members of our family group. Matthias had just become a junior member of the St. Michael's Choir, and it was his very first concert that our group had come to see. "Are you the Pope?" Matthias asked the Cardinal, seeing that the vestments he wore were very unusual. "Well, not quite. I am, er, a Cardinal; the person who, er...," apparently at a loss of words as he struggled to explain his "complicated" position to a child. Suddenly his eyes lighted up and he continued, "Actually the Pope is my boss, you see, and I listen to him." We couldn't help but burst into laughter. So did Matthias, who seemed satisfied with the answer. 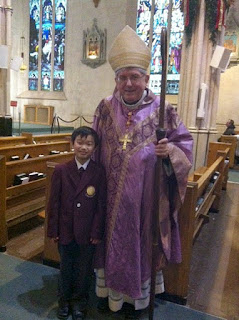 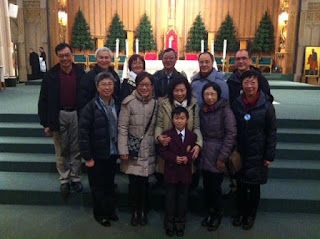 May your Christmas be filled with peace and great joy! May this New Year bring you hope and good health! Merry Christmas and Happy New Year Everyone!!