The Papacy and I - Two Decades Later 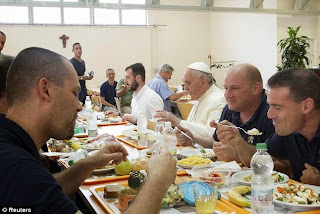 Here is a great article on the papacy: If No One Is Pope, Everyone is Pope – A Homily for the 21st Sunday of the Year.

The article was actually Mgsr. Charles Pope’s homily on the Mass readings of the 21st Sunday of the year. Its Gospel reading, as we Catholics know, is the famous and often controversial “Peter rocks!” passage of Matthew 16:13-20. Mgsr. Pope made a few very convincing arguments for papacy which I haven't come across before. The title itself - If No One Is Pope, Everyone is Pope - is a good example.

The story about my personal conversion had been told and re-told I-don’t-know-how-many times in my church programs, RCIA, family bible sharing groups, and various faith-related activities. Before my conversion, which took place gradually over a period of almost 10 years that began in the early nineties, I was a dissenter searching for the truth. In spite of my dissension, I left the door slightly ajar to allow the Church to convince me if she had the truth. Today, thank God, I believe I have my feet firmly planted in truth in as far as the papacy is concerned. If there's any credit I could take, it's not that I was smart enough to understand the Church doctrines and her scriptural arguments, but that at least I had the humility to say, "I need to know; convince me!"

Unfortunately in my encounters with many Christians and thinkers of the reformed churches, either in person or through reading their writings and internet publications, many of them were either unable or unwilling to really keep their eyes fixed on the truth and then embrace it unreservedly once discovered. Most of them were too gung ho about "winning", and couldn’t care less what the truth really was. The following statement in Mgsr. Pope’s article is right on about this self-defeating attitude:

But frankly most of the objections amount to a kind of wishful thinking by some, who want this text to mean something other than what it plainly means.

Of course, the objections referred to by Mgsr. Pope in the above statement are those that refuse to see Matthew 16:13-20 as Jesus' installation of the Petrine office of papacy.

If you need a good example that clearly demonstrates what Mgsr. said, just read those hilarious comments made by PBJ in response to his article. One insurmountable hurdle that stands in our way as we try to communicate with the separated brethren of the reformed churches is that many people can’t think clearly and coherently, just like PBJ.
Posted by Edmond Lo at 8/26/2014 11:48:00 AM